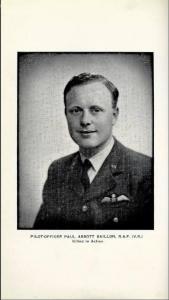 Paul Baillon attended Ratcliffe College from 1924-1932 after which he trained as a solicitor. At the outbreak of hostilities he enlisted in the RAF, and on completion of his pilot training he was posted to 609 Squadron as a fighter pilot flying Spitfires.

This was during the intense aerial battles over England that became known as The Battle of Britain. It was during his first engagement with the enemy, and flying Spitfire P9503, that he managed to get a bust into an Ju88 somewhere over Salisbury, but was hit by return fire. This damaged his oil tank which unfortunately covered his windscreen, thereby preventing him from having any chance of landing his damaged aircraft safely. Paul elected to bail out, and as he floated safely down to earth he watched his Spitfire crash in flames close to a small wood near Upavon in Wiltshire. Very sadly, almost exactly a month later, in November 1940, Paul was shot down by Helmut Wick in a dogfight near the Needles on the Isle of Wight. A profile on his actions during the Battle of Britain can be found here.

The remains of his crashed Spitfire P9503 had been buried in the shallow earth of Salisbury Plain until 2013, when a team of MoD archaeologists led by Richard Osgood carefully excavated its remains. His daughter, Rosemary, attended the dig site (see picture) 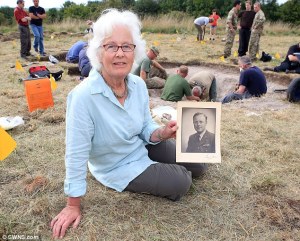 Details of the MoD dig were carried across the major news stations including the BBC which can be found via the link below:

BBC News – Spitfire being dug up